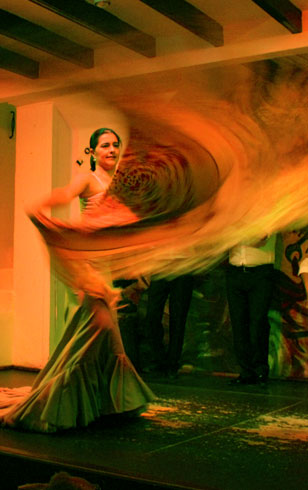 The Tablao Los Gallos Flamenco Staff consists of a large cast of artists, many of which have won national and international awards.

In our shows, we try to offer a variety of “palos flamencos” for the public to understand and feel the rationale behind each of them and learn their differences.

These are some of the main flamenco styles that can be enjoyed in the Tablao:

We make a selection of the best “palos flamencos” from each artist to set the show, which varies daily. This way you will never see the same show at Tablao Flamenco Los Gallos.

The climax of the show comes with our Final Party. The artists fill the stage with their art, perform various choreographed dances, dance Sevillanas and Bulerías, and show the charm and the magic of flamenco that make visitors carry with them a great memory of their visit to Tablao.

Our shows are characterized by authenticity, and stand to be in the first line of the purest singing, playing, and dancing that make us experience unique moments.

The duration of the show is two hours, the one with the longest and highest content of all tablaos in Seville, Madrid, and Barcelona.

After more than 44 years of offering the best show, we have become the oldest Tablao in Sevilla, which has given us great recognition and international prestige.

We are characterized by maintaining a real show, always being in the first line of the purest singing, playing, and dancing.

Because of our Tablao career, many artists have passed or have made their first steps here, such as:

Tablao Flamenco Los Gallos will reopen and offer its show as soon as possible and in compliance with the corresponding sanitary measures. We hope to see you very soon.